I love this city way better than Hanoi, the annoying capitol. People are nicer, and there’s so much to see.

A friend of a friend, Catherine, met up with me in Saigon. She is one of thirteen children, a Texas sweetheart and great fun.

We walked to the Ben Thanh Market which has tons of places to eat, fresh produce and souvenirs. Pushy vendors try to sell you anything you look at.  The chicken we got was excellent.

History time, off to the War Remnants Museum we went. It was super propagandist, but it was still pretty interesting. The Agent orange display was heart wrenching. Many generations were affected by chemicals that were dropped on Cu Chi to kill all vegetation so we could identify where the tunnels were. Exposure to this chemical caused health issues for generations to come. Baby’s were born retarded or without limbs.

After the depressing display, we checked out the Bitexco Financial Tower, which is the tallest building in Saigon.  We made it just in time for happy hour on the 52 nd floor which is where they have a helicopter pad. It was night so we got a good view of there city all lit up. There were two other rooftop bars we checked out after, but the Financial Tower was by far the best as far as view and atmosphere.

The next day we had to check out the Cu Chi tunnels and the Cao Dai Great Temple in Tay Ninh.  First we went to the Cao Dai Temple and arrived just in time for a service. Local attendees dressed in all white and some elders wore colorful robes. The music had traditional Vietnamese string instruments and pipes and a chorus. They worship the divine eye which knows all. They believe that there are 36 levels of Heaven and 72 planets. Number one being the closest to heaven and 72 nearest to Hell. Earth is number 68. Lol!! 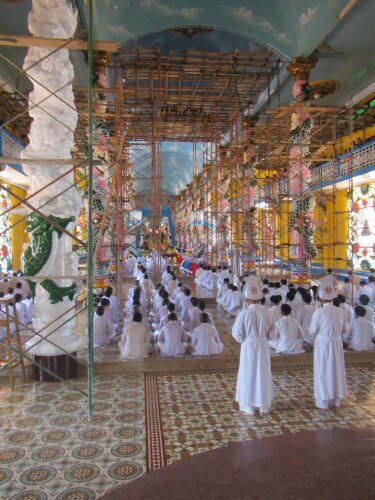 The Cu Chi Tunnels were next on our itinerary. I got to climb in one of the original entrances, which was super compact. 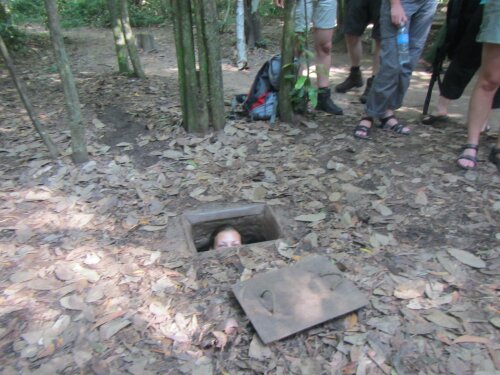 We also got to crawl in a tunnel which made me feel claustrophobic about half way through. This tunnel was made bigger so tourist could fit and experience what it was like. During that time the Vietnamese were very tiny especially because of their diet. I wouldn’t be able to fit if it were any smaller. 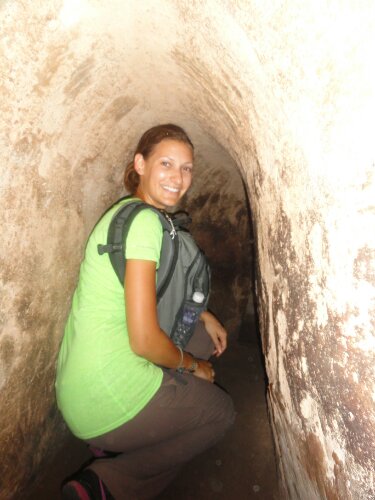 Back to the Viet Cong’s diet, they only ate potatoes to fill their stomachs, so eating an American soldier dog wasn’t out of the question. Americans used dogs to sniff out the tunnels because the entrances were camouflaged as ant hills, which were everywhere.  Sometimes a dog would get caught in a booby trap or would pass away. Soldiers would leave the dogs and the Vietnamese would eat the dogs. As you know, they still eat dog to this day.

They sure knew a thing or two about booby traps:

We checked out a night market and got an excellent Vietnamese meal!

After we grabbed ice cream and ate it at the park where young teenagers hung out on their motorbikes and people played badminton. Two Spanish ladies, who just arrived to Saigon, approached us asking in Spanish where we were staying. They didn’t speak a lick of English, but we managed to tell them en espanol where to go and how much we were paying.

Tomorrow we head to Phnom Penh, Cambodia via bus.