Meagan, Mandy and I (MGM) took a mini bus from Ubud to Padang Bay to catch a speed boat to Gilli T, which is right next to Lombok.

As Mandy says, “it feels like we just crossed the Bering Strait”. The swells were so rough and of course we were sitting in the back of the boat getting drenched because the waves were pouring over the front of the boat, but hey we made it and none of us got sea sick.

The island’s circumference is 5 miles, there are 800 people living here and there are no cars or motor bikes. The locals have a great sense of humor and they say “you’re welcommm” in the most sincere way. The island is over run with cats with mostly cropped tails. I was told the cropped tail meant they had an owner, but then I also heard that if they had a cropped tail it meant they were product of incest. Who knows what is true?

There are supposedly no police on the island, but we saw some men dressed in black escorting a handcuffed criminal around the island with a sign saying “I stole something, I’m a Thief” They should do that in the States!!

The way to get around is by foot, bike or horse chariot.  We took a horse chariot to a hotel that was suggested by the driver. We didn’t like it so we hoofed it on our own because we felt bad for the small horse that was struggling to pull us. We found a really nice place on the east side. The next night we stayed on the north/west side where you could see the sunset. 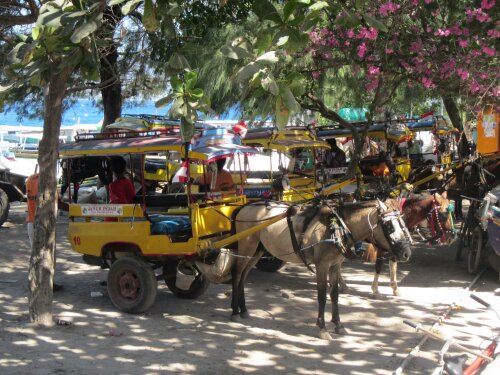 For Meagan’s birthday we went on a snorkeling trip where we were taken by boat to snorkel sights off all the 3 Gili islands. Off Gili Meno we saw a turtle.

We worked out on the beach and went for a run one day. But mostly we relaxed.

We went out to the beach restaurant to celebrate Meagan’s birthday. We all got excellent fish and they brought a dessert with candles and sang happy birthday to Megs.

3 Australian guys approached our table to ask if they could join us. Funny thing is we were making fun of one while he was walking up to us because of his big muscles and low cropped sides on his tank. He actually turned out to be the nicest guy and one of the other guys was a complete a hole. We ditched the Aussie crew and went next door to the Irish bar and went right onto the beach to dance with our feet in the water.

Mandy was really tired one night, so Megs and I watched The Beach in a theater that was right on the beach. When we got there another movie was already playing. Within minutes Meagan and I were crying because it was about the Australian family that was affected by the tsunami that hit Thailand.

M&M left back to Bali and I stayed because they were going home the very next day. As their boat was coming to shore another boat was backing up and hit their boat. The boat tried to compensate by flooring it through another boats anchor lines. Thank god no one was hurt and the boats were OK.

After watching the boat take off, I ran/walked the whole island and it was very beautiful! There was a flock of chirping birds flying around that sounded kinda like wind chimes. When they were flying upward the sound was at a higher pitch and when downward it got lower. It was the weirdest sound.

I went to the west side to watch the sunset. 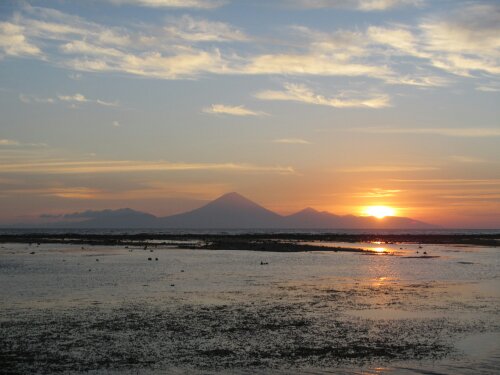 I was staying at a really cheap place. There was the occasional cockroach in the bathroom. The third night there were 3 and one was a flying one which caught me off guard when I opened the door to go back to my room. I was praying the gecko in the bathroom would gabble him up even though the cockroach was about as big as him. That didn’t happen and somehow the damn flying cockroach made it in my room. I woke early and found a nicer place with air con.  Plus since Mandy was no longer around the mosquitoes started their love affair with me again.

That night I went out to the street food vendors and met 2 very nice Austrian girls in line and 2 Italian guys at the tables.  I went out to the Irish Bar with them and met 3 Californians that overheard my Californian accent. Two of them lived in Irvine and one was living in Bali, such a small world.  Then I bumped into a Artur, who was our Brazilian neighbor in Uluwatu.

He was nice enough to walk me back to my place at the end of the night. On our way a British bicyclist almost hit me. It was a couple and the guy had crutches in his arms as he rode his bike drunk. I insisted I help him and took the crutches so he wouldn’t crash and burn. Artur followed suit and took over the girls bike as I walk with her arm in arm so she wouldn’t fall over. They actually lived on the island, so we went far inland to find a pretty nice home. They were super appreciative and they insisted we have a glass of wine and an aperitif. We sat and talked for an hour. Oh and they had two cats (blah!) One had a big scar that was still healing. A monitor lizard had attacked it.

I was ready to get off the island, so I went to book my trip back to Bali. I need to figure out my visa for New Zealand and Australia which will conclude my trip and I will also need to book my flight home.